We believe modeling expert speakers and their coaches will help build the next season of champions. Would you like to be part of our team? Click through our Application Page for information and writers guidelines.

Zachary has competed in NCFCA Lincoln Douglas debate for three years, including making it to finals at a national-level tournament and competing at Nationals. He is also qualified to Extemporaneous finals at his regional tournament. In his spare time, he's a runner and a golf player who does some science activities on the side. This year, Zachary is competing in his fourth season of NCFCA Lincoln Douglas debate as a high-school sophomore.

Aaron Clendenen is a NCFCA LD student with two years of experience. He has accomplished much in his short time in NCFCA, including (but not limited to), placing 7th at regionals (Region II) and receiving third place LD speaker at the Medford tournament.

Mark's competitive history includes top awards in policy, Lincoln-Douglas, parli, extemp, and apologetics in NCFCA and Stoa. He is currently a rising Junior at the University of Texas, dual-majoring in the Plan II Honors Program and the School of Business. Through his connections with forensics and writing for Monument, Mark earned an internship at the Texas Civil Justice League, where his research aims to increase stability and fairness in Texas' civil justice system. In his spare time, Mark plays for UT’s rugby team and serves as the Domestic Affairs Editor for the Texas Orator, UT's student-led political review.

Kirstin competed in NCFCA in eight speech categories, as well as both Lincoln-Douglas and Policy debate. She ranked in the top 4 at Nationals in three speech events and advanced to debate finals at five tournaments, three of which she won. Her favorite accomplishment was receiving first place at Nationals her senior year in Impromptu. Kirstin is currently a student at Wheaton College majoring in music and enjoys running her own calligraphy business on the side.

Steven is a former STOA kid who likes philosophy, linguistics, caffeine, speaker points, the Oxford Comma, and memes. He is also a black belt in karate and a camp counselor over the summer. He is a student at Union University double majoring in Spanish and Biblical Languages, and he is currently competing with Union’s debate team in IPDA. Steven specializes in music, puns, predicate nominatives, and sarcasm.

After having a lukewarm novice year as a sophomore, Jonathan gained an affinity for debate and research. He qualified to NITOC in both his junior and senior years in TP and Parli and won several tournaments in TP. Currently, he is a sophomore at Freed-Hardeman University studying study Law and Politics. He works as a researcher for the Grassroot Institute of Hawaii and also with the John E. Talbott & Associates law firm in Henderson, TN. Jonathan believes that there is no sufficient substitute for well-researched knowledge.

Coach Jeub is owner and lead publisher of Monument Publishing. He has been coaching since the mid-90s as well as providing the leading source material for speakers and debaters in multiple leagues. Mr. Jeub currently coaches speech and debate at Monument Academy where he also teaches 7th grade English, and he runs a personal website for his most recent writing projects.

Zeke Johnson is entering his third year of competition in NCFCA and his sophomore year of high school. He consistently advances to out-rounds in team policy. He loves to research anything that deals with debate.

Rebecca Sumner has been debating for four years. She has qualified for team policy debate at NITOC for three years in a row. All three times, the qualification came within the first three tournaments.

Coach Vance debated in National Forensic League debate while in high school from 1979-1982. In college, he judged at high school NFL tournaments in North Carolina. A homeschooling dad himself, he realized the growing potential and benefit of homeschool debate and switched over to coaching homeschoolers a couple years later. In 2001, he helped Chris Jeub with bringing The Blue Book to a more advanced level. He has been co-authoring Blue Book ever since.

Luke has competed in speech and debate for four years. He has consistently advanced to outrounds in both speech and debate the last two years. Researching and writing cases are some of his favorite parts of debate.

About Joining Our Team

Do you have an interest in speech and debate? Editing? Publishing? Monument Memberships need writers, copy-editors, and assistant coaches. If you fit the mold, we can certainly use your help. We pay our contributors for their work, as well as receive a letter of recommendation for future endeavors. Submit your inquiry at MonumentMembers.com/about/apply. 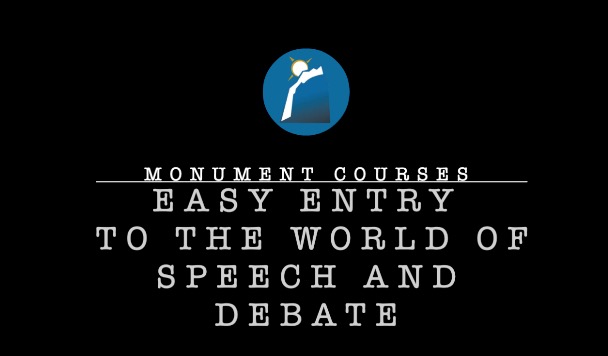 We are currently going through EASY ENTRY TO THE WORLD OF SPEECH AND DEBATE, a week of FREE instruction (available through June 5). Return to the front page to register.